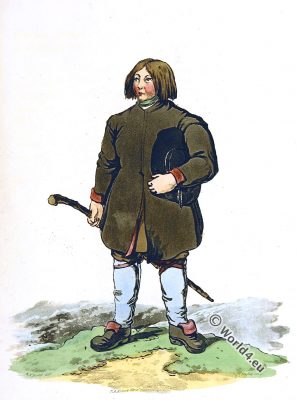 Dalarna is a historical province (landskap Swedish) in the heart of Sweden.

The borders agree approximately in line with those of the present province of Dalarna. Dalarna means “the valleys” what the wooded, hilly landscape well characterized around the Lake Siljan and the Dalälven. The inhabitants of Dalarna – The Dalkarlar or Mazar (male) and dalkullor (female) – speak the characteristic dialect Dalmål. The first mention of Dalarna is called 1177 in the Sverresaga where the province Järnbäraland (“iron-bearing land”), a reference to the early mining activities. Dalarna is described as a pagan land that was in subjection unto the king of the Svea. Selma Lagerlöfs novel Anna Svärd depicts the life of men and women from Dalarna who spent their life as a peddler in the 19th century. In Dalarna there are many regional variations of traditional costume which is worn on special occasions such as the erection of Majstång to Midsommar. Dalarna is also a center of folk craftsmanship. The dalecarlian horse (Dalahästar) fabricated in Nusnäs are now a symbol of the whole of Sweden. The typical red color of Swedish wooden houses Falu Rödfärg, originates from Dalarna. 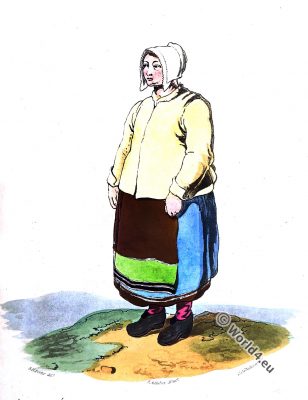 The peasantry in this province are robust and rough in their exterior. The white and black Dalecarlians, as they are called, differ not in complexion, but in the colour of their, dresses; one being black woollen cloth, and the other white. The coat is wide in the sleeves, and closed straight down the breast with hooks and eyes, having nothing like a button; it reaches below the knees. Their stockings are grey with red clocks, and garters. Huge shoes, with thick wooden soles, and tied with an old fashioned leathern flap falling over their insteps. They all wear a low-crowned hat, with a white cord two or three times wrapped about it; the brim is broad, like a Quaker’s. The women coif themselves in a little white cap close to their head and face. White woollen bed-gowns; petticoats of brown or blue flannel neatly striped with various colours; a blue apron with red lines running round it; a pair of bright red stockings with clumsy shoes, whose heels come under the centre of the foot, completes their attire. The white peasantry, both male and female, have their cuffs of a dark blue. The black usually have returns of red.

The food of this hardy race generally consists of salt herrings, and wheaten cakes, hard as iron; hundreds of which are hung from the ceiling of each cottage, with a stick perforating the middle. Bacon is a great treat; or, indeed, any sort of meat, as that branch of provisions rarely regales their appetites. They drink vast quantities of a very small and sour beer: but a meal is never finished without two or three glasses of their brandy, much worse in flavour, and more fiery, than the vilest whiskey I ever tasted. They pour it over their fish by way of sauce; and some of the women give it to infants at the breast, as well as to others at a walkable age, who drink a draught of it without a wry face, so accustomed are their little stomachs to the glowing beverage.

The cottages are in general very clean, as the delicate part of the family are most actively industrious. One hall, with a large hearth, is the plan of their habitations: this is comfortably appointed with tables and forms for the service of themselves and friends. The beds are in the wainscot, one over the other, like those in the cabin of a ship. Here the whole family sleep; and with as much modesty, I am told, as if each had separate apartments. The stock of eatables being dried fish and cakes, are part of the pendent ornaments of the room, with the addition of an old rifle; a great chest (containing the household wardrobe, &c.) under a sort of range full of plates, and perhaps a clock, complete the furniture. In Dalecarlia, as well as near Stockholm, oxen are used in husbandry; they are harnessed like horses; and, in all the services to which they are put, perform their duty with equal effect.