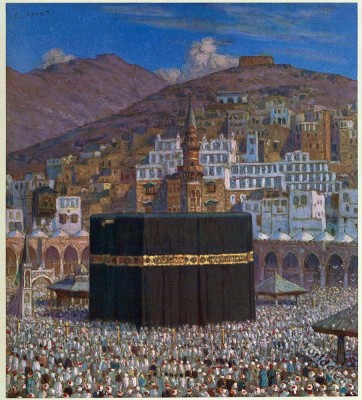 Praying round the sacred temple of the Kaaba of Mekka.

Praying round the sacred temple of the Kaaba of Mekka.

The Kaaba (Arabic الكعبة) ‘) is a rectangular building in the courtyard of the Holy Mosque in Mecca to form a “house of God” (Arabic بيت الله) the central sanctuary of Islam. The importance of the Kaaba is the fact that they both target the great pilgrimage (hajj) is that should take every Muslim once in his life, if he is capable of, as well as the small pilgrimage (Umra). As part of their pilgrimage stay in Mecca, the pilgrims circumambulate the Kaaba seven times counterclockwise and praise while Allah; this circumnavigation is called Tawaf (طواف).

From the book: “The life of Mohammad the prophet of Allah, by E. Dinet and Sliman ben Ibrahim; illustrated by E. Dinet, ornamental pages by Mohammad Racim.”, “Dinet, Etienne, 1861-1929.”