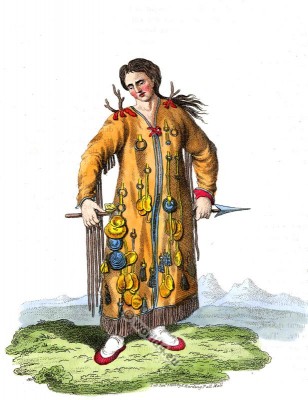 A Tungusian Priest, in the Vicinity of the Argun.

A Tungusian, Evenk Shaman in the Vicinity of the Argun.

Back of the shaman costume

THE Evenks (Formerly Tungusian) are pagans of the sect of the Shamans. Boa is the appellation given to the Supreme Being, Bougai is the name of the devil, and their idolatrous priests and magicians are called Shamans. The Evenks believe in a future life, which they imagine will be similar to their present state of existence. They have no idea of future punishments. The children who are subject to convulsions or frequent bleedings at the nose, are thereby considered as called to the priest-hood, and are placed under the care of’ a Shaman, who charges himself with their education.
The Evenk enjoy a state of freedom, under the direction of’ chiefs of their own choosing; in time of war, these chiefs are placed at their head, and in peace, they are appointed arbitrators of all differences. The descendants of their ancient chiefs enjoy a particular degree of consideration, and it is from this order of nobility that their new chiefs are selected. Upon the slightest differences the Evenks have recourse to their chiefs. These men, who discover so much apathy in times of scarcity and of the greatest privation, carry their desire of revenge to the utmost pitch of extravagance. In their single combats they use the bow and arrow. Their duels arc subject to nearly the same laws and ceremonies as our ancient camp fights. Their old men are appointed to examine the arms, to mark out the place of battle, and to prescribe the distance at which the champions are to stand, and the moment of drawing.

If a person of the common rank seduces a girl with a considerable for-tune, or remarkable for her beauty, he is in danger of being shot by the relations, friends, or lovers of his mistress. In all matters of’ dispute brought before their chiefs or elders, where it is difficult to discover the truth, the parties arc put upon their oath. The Evenks have three kinds of oaths, each more solemn than the other. The slightest consists in raising the blade of a knife towards the sun, and in agitating it with violence, saying, at the same time, ” If I am guilty, may the sharpest pains seize my body, and torment it as I agitate this knife!’ The second is performed with more formality. The person accused is conducted to a sacred mountain, where he pronounces with a loud voice, “If I am guilty, may I never be successful in” hunting or fishing; may I be bereft of my children, and also of my own existence!” But the third is still more terrible than the two former. A dog is killed and cast into the fire, but before it is consumed, it is taken out and thrown to the company; the accused person is obligated to drink some of the blood of the animal, uttering at the same time these words: ” I drink ” this blood in witness of the truth! if I lie, may I perish, be burnt, and “dried up like this clog!”

Formerly known as Tungus or Tunguz, Mongolian Tungusic people of Northern Asia. Ergune or Argun is about 1620 km long right, southern source of the river Amur (Heilong Jiang) in Northeast China. The Evenks are recognized as one of the Indigenous peoples of the Russian North. The traditional religion of the Evenki is strongly influenced by shamanism. The Evenki shamanism was in research even as a classic, typical form. The term “Shaman / chaman / saman” comes from the Evenki.