Anne Boleyn 1st Marquess of Pembroke (born 1501 or 1507, probably at Blickling Hall (Norfolk); – 19 May 1536 in London) was the second of Henry VIII’s six wives and Queen of England from 1533 to 1536. Her refusal to give herself as a mistress to King Henry VIII led to his divorce from Catherine of Aragon and was one of the triggers for the formation of the Anglican Church by separating the Church of England from Rome. But like Catherine, she did not give Henry VIII the male heir he had hoped for.

Anne Boleyn fell from grace and was beheaded on May 19th, 1536 for alleged adultery and treason. Her daughter Elizabeth I, meanwhile, ascended the English throne in 1558 and is one of England’s most important and longest-reigning monarchs.

THE EXECUTION OF ANNE BOLEYN.

Tablet to her memory

On her present Majesty’s first visit to the Tower of London, the spot in front of St. Peter’s Chapel, where the unfortunate Anne Boleyn received her death-stroke, was pointed out as one of melancholy interest, and by Her Majesty’s personal commands a small brass tablet recording the event was placed in the middle of the space where the scaffold upon which she received the blow of the executioner had been erected. The suddenness of this unfortunate lady’s transition from favour to disgrace, and from disgrace to death, is not the least affecting part of her story.

Cause of her committal to the Tower

It was on the 1st May, 1536, that during a tournament at Greenwich, she dropped her handkerchief, which one of the courtiers took up and put to his face with such a gesture as to excite the King’s suspicions; if indeed those suspicions ever in reality existed, or were other than the pretence for removing Anne, to make way for the new object of his desire.

Next day the Queen’s brother, Lord Rochford, Norris, Weston, and Brereton, all gentle men about the Court, and Smeton, a musician, were committed, and Anne herself arrested and placed in the Tower, under charge of Sir W. Kingston, the Lieutenant entreating in vain to speak but one word to the King, and solemnly protesting her innocence of any offence against him. That officer, in his letter to Secretary Cromwell, tells him, that as he led the Queen to her lodgings, she asked was she to go into a dungeon? to which he had said, “No, Madam, but to the same lodging where she lay before her coronation.”

“It is gude for me, she sayd; ‘Jesu have mercy on me; and kneeled down weeping apace, and in the same sorrow fell into great lawyng, which she hath often done since”— violent hysterics caused by her distress and terror were probably what Kingston described as” lawyng.” He further tells the Secretary, of her passionate protestation of her innocence, and of her expressions of sorrow for her brother, and the other gentlemen involved, for no fault of theirs, in the cruel accusations of her enemies.

Sir W. Kingston seems to have been deeply touched with the unhappy Queen’s behaviour, and though he was ordered to set Lady Kingston to watch for any unguarded words she might utter, he evidently obeyed these orders with pain, and mitigated the misery of her position as far as he dared.

On the 10th of May, the three gentlemen accused of familiarities with the Queen were tried, and, without a shadow of proof, declared guilty. On the 13th, the Queen and her brother were tried in the Council Chamber of the Tower, and on charges the most frivolous and unreasonable, Rochford was found guilty.

Execution of Rochford and others

The wretched Smeton was, by false hopes of life, induced to confess the guilt of the Queen, upon which evidence she was condemned, by direct instructions to the Court from her barbarous husband, to die either by burning or beheading, according to the King’s pleasure. On the 17th, Rochford with the other three gentlemen was beheaded on Tower Hill; and Smeton, in violation of the promise of life by which the condemnation of the Queen had been so basely extorted from him, was hanged at the same time.

Kingston’s letter, written next morning to Cromwell, informs him that, according to his orders, he had caused all strangers to be put out of the Tower, suggesting at the same time that it would be best to have a reasonable number of persons admitted to witness the Queen’s execution.

“This morning,” he says, “she sent for me, that I might be with her at such time as she received the be no pain, it was so sotell” (alluding to the skill of the headsman).

Then she sayd, ‘I have heard the executioner was very good, and I have a lyttel neck,’ and put her hand about it lawing hartily. I have seen many men, and also women executed, and they have been in great sorrowe; but to my knowinge thys ladye has much joy and pleasure in death.”

The Queen had afterwards an interview with Lady Kingston, in which she made the most affecting and solemn protestation of her innocence, probably rather to relieve her overburthened heart, then with any hope of mercy from the King. Next day the unhappy Queen was brought out for execution in front of the chapel upon Tower Green.

The exclusion of the public had no doubt been deemed necessary, lest the sight of her beauty and her declarations of innocence might excite a popular tumult. About thirty persons were appointed by the King to be present as witnesses of her death. She behaved with much resignation and self-command, kneeling down to receive the stroke of death, but without any block before her, as the Calais executioner did not use the axe, but one of those long, heavy, two-handled swords, which were formerly used in some cities of Germany, as the instruments of execution.

As she could not refrain from turning her eyes on the man, he became nervous and uncertain how to deal his blow, when at last he took off his shoes, and causing his assistant to approach and attract her attention on the right, he stepped up behind her left shoulder, and with one heavy sweep of his huge sword, struck off her head in an instant.

No respect was shown to the Queen’s body, which was thrown into a chest made for holding bows and arrows, and buried, along with the corpse of her brother, in St. Peters Chapel. Such was the end of this most unfortunate lady, who but three years before had entered the Tower in triumph as the idol of the King, and the admiration of all around her.

Levities which even now would be thought slight and pardonable, but which in that coarse and licentious Court could hardly deserve even a moderate censure, were the only offences proved against her, unless the extorted accusation of Smeton can be regarded as proof of any deeper guilt.

On the other hand, she had by her gentleness and frequent mediation, between her savage husband and those who had the ill fortune to offend him, gained the favour of the nobility and the affection of the people; and the precaution used at her execution showed the likelihood of an insurrectionary movement, had the public been allowed to assemble within the Tower and to witness this cruel scene. 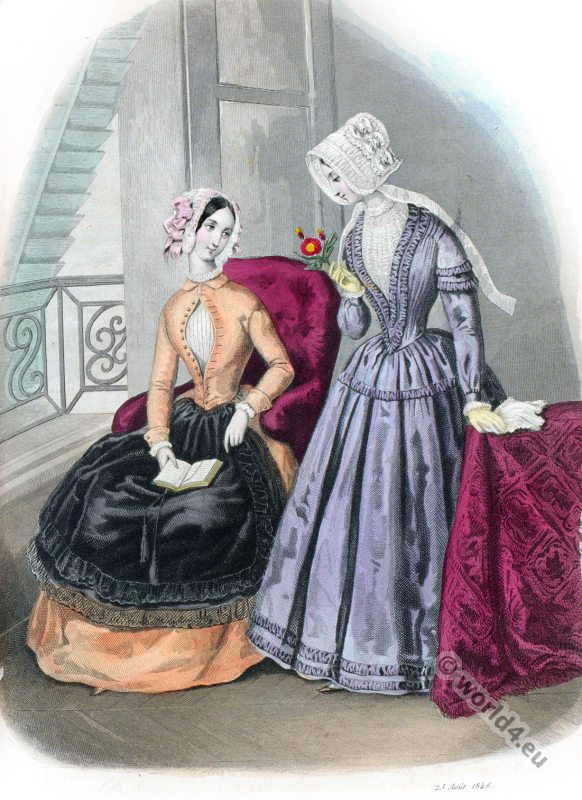 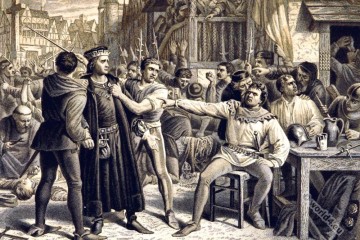 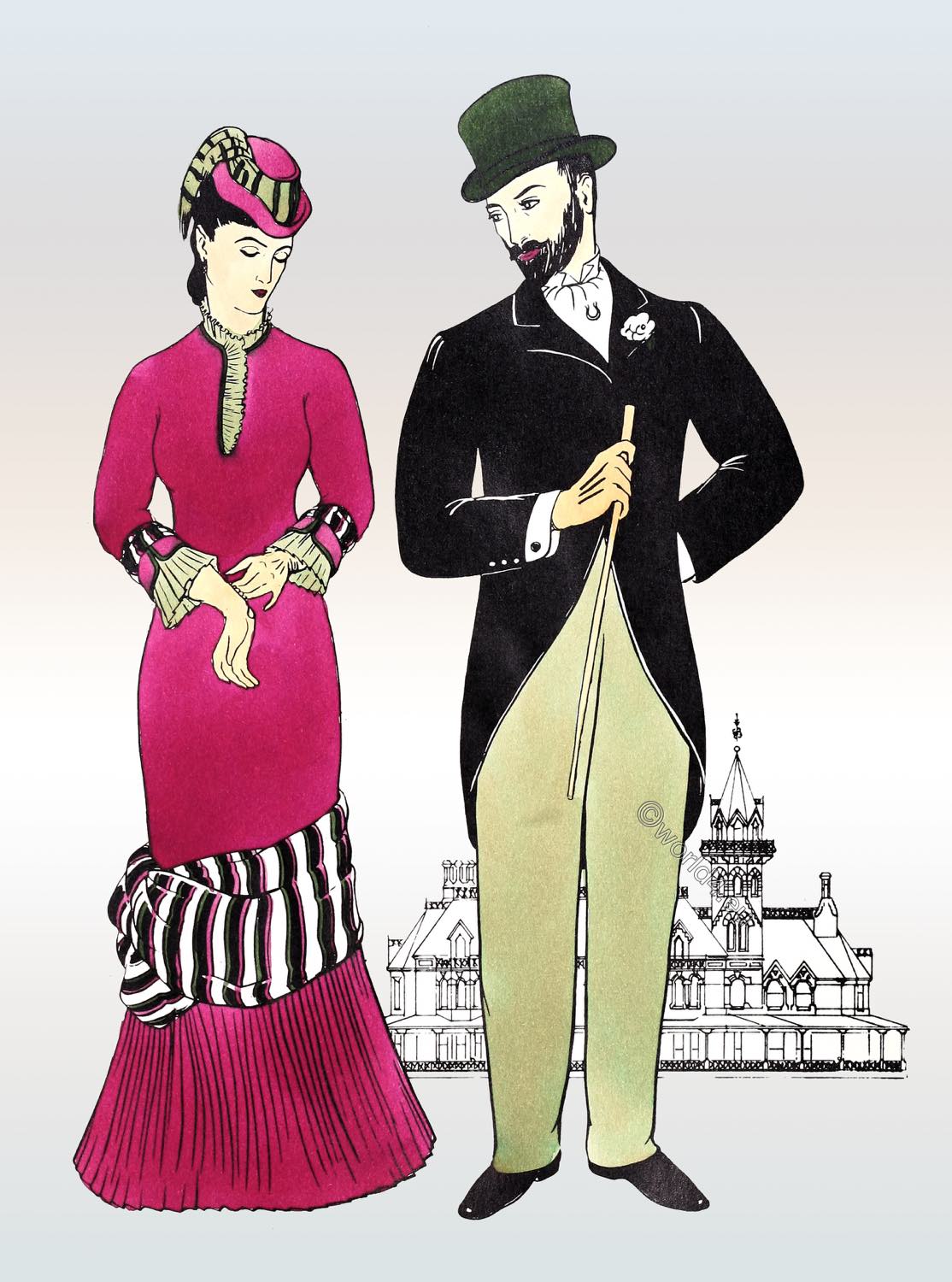 A lady in so called princess dress and waterfall hairstyle. The bearded gentleman is dressed in formal afternoon attire, wearing…