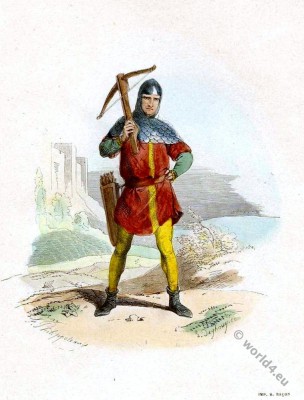 French crossbowman of the 12th Century. Militia of commons.

French crossbowman of the 12th Century. Militia of commons.

Events in the 12th century

1118: In Jerusalem the first spiritual order of knights founded under the name of The poor knights of Christ from the Temple of Solomon in Jerusalem. The Knights Templar is a model for other religious foundations with both clerical as well as military character, such as the Hospitallers and the The Knights of the Teutonic Order of Knighthood. The members of the Order of the Knights Templar want to save the pilgrimage routes in the Holy Land and protect the Christian kingdom of Jerusalem.