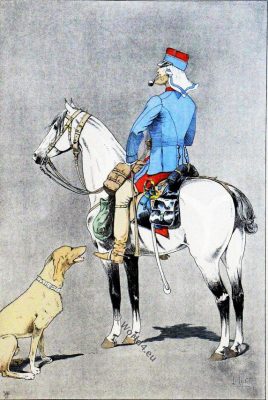 Algeria Officer of the 9th regiment of horse hunters.

Algeria Officer of the 9th regiment of horse hunters.

The 9th regiment of horse hunters is a regiment of French cavalry created in 1757 and dissolved on 1 October 1961.
In 1881 he took part in the expedition to Tunisia and that of Oran to return definitively to France in 1883. The 9th regiment rode more than ten years on the soil of North Africa and fought very often beside his brothers in arms the hunters of Africa. It is the regiment of hunters on horseback that remained the longest in Algeria.