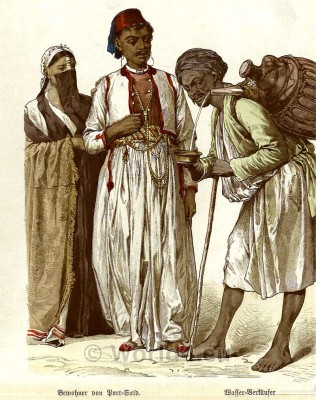 A woman with a veil and headscarf wearing a precious cloth cord embroidery on the arm, to a light tunic abaya. Her husband wears a fez as headgear, a precious long necklace and a collar made of ivory. To an open jacket, a harem pants, the Sal Sapik, (SAL û Sapik “pants and shirt”), girt with a broad cloth. The vest is made of precious white silk embroidered red and deposed. Red was the color of wealth. The same color is the shirt with decorative buttons.
Pictured right a water seller in a turban, tarboosh, vest, and high belted caftan.